I have been trying to have Charts running automatically on a Networked PC driving a screen fixed to the inside of my 737 cockpit.

The screen is currently shared between VPT (in a Chrome window), Prosim-IOS and Aivlasoft’s EFB Client. I switch between them using a button driving a Lua plug-in to wideClient.

I have tried adding Charts as a 4th display to switch between. However, it won’t work because as soon as its initial display is hidden, if favour of one of the others, this display occurs: 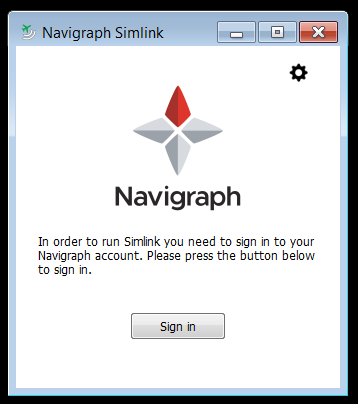 This ruins the switching capabiities.

I’m not actually using “SimLink” as such (I’m not even sure it works over a Network), and I cannot understand why Charts works fine when initially displayed, but then this happens. Please advise.

If you dont need Moving Map, and hence Simlink, and Simlink is causing grief, try disabling or uninstalling Simlink.

I didn’t deliberately install it – I assume that’s done by the Charts installer exe.

I’ll try uninstalling it, but first can you tell me it is actually can be used from a Networked PC?

Ok. Uninstalling SimLink from the cockpit PC did the trick. I now have buttons which smoothly switch between Charts, VPT, EFB2 and ProsimIOS.

If installing SimLink on the P3D PC allows Charts moving map on the networked Charts PC, I’ll try that. It should be easy enough just via SimConnect, so I don’t really understand the function of SimLink.

Simlink is communicating with Navigraph servers, as is the Charts app. There is no direct communication between Simlink and Charts. So you can install Simlink on your P3D PC and use moving maps on any other mobile device or computer irrespective of network setup, as long as there is an Internet connection.

I’ll be trying it, then.