When will the MSFS in game panel get updated to support the new charts?

This is a major bummer for all of us VR flyers.

Was really looking forward to the version 8 release, but very disappointing that none of the new features are included in an updated in game panel. Understand that vectorized charts can’t be used for now, but at least bring us the new features you can, that does not depend on the vector charts. Autopinning of charts, drag and drop routing, airport weather and wind etc. should not depend on vector charts, no?

I am massively gutted! I only ever use MSFS and in VR on VATSIM. I really really thought V8 charts were going to allow full-on VFR at last, BUT it appears not.

I feel like we’ve been sold a dream and then told, oh no you can just keep paying for the old version.

I waited a long time for this functionality and now I learn there is no update for the in-game panel? Very disappointed. Talking about burying the lead.

This is a huge let down. Perhaps this needs to be made clear on your site especially for new subscribers. @stephen

Also, have you guys been in touch with Asobo recently to to inquire about updating the in-game panel?

What a disappointment! Any sense of timeline before you have a solution for VR?

Really unhappy that I can’t use Charts 8 from within MSFS. What’s the point of having all this info available and not being able to access it - especially when flying in VR.
This just isn’t good enough Navigraph.

This is a major disappointment. All these amazing new features that I have been looking forward to for so long, and then it is not supported inside the sim itself, which makes it useless for my flying, since I only fly in VR. Pinning the window of the charts will work to see it, but is not interact-able. I was really looking forward to having a seamless experience without the need for window pinning. Bummer!

Gutted! I’ve been looking forward to this for the longest time and like many others, I also only fly in VR.

Glad to see so many others are voicing their opinion here. By the looks of it this thread alone has had more replies in a few hours than the “Charts” sections on the forum sees in a week, so hopefully Navigraph will see the dedication and disappointment, and prioritize getting the in-game panel up to speed going forward. 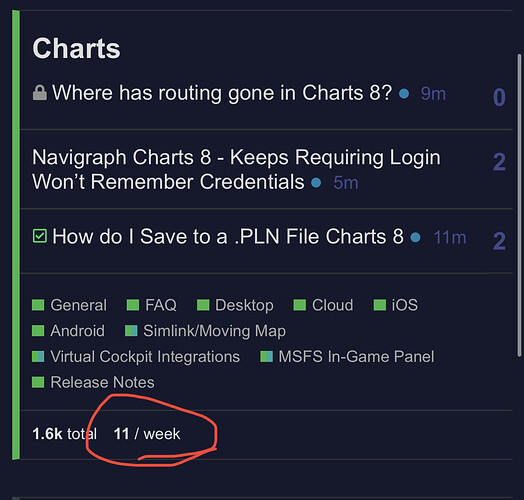 New subscriber of just over a month, exclusively fly in vr this is no good at all hope you can update for vr otherwise itll be tally ho come renewell time ill make do with out it. Not great paying for what seems like half a service now after seeing the new update.

I joined the v8 beta at the beginning to try out MSFS in VR, in which I exclusively fly. I was told that it would be available soon and was just a minor issue with the login process. That now does not appear to be true.

This is terrible news for MSFS and Navigraph. It would seriously be worth rethinking earlier decisions that led to this - it seems such a shame. I was planning on buying a new 1 year ultimate sub, but now I feel like just spreading the word of this restriction. Such a short-sighted thing to do.

I’ve been a Navigraph subscriber for just 2 months but not once used the windows app, only exclusive the in-game panel, since I’m flying…. Why tab out to do planning and viewing charts when it’s available in game.

But now you inform us that all the cool features and VFR charts, we can’t get in MSFS…?

As with everyone else here I was quite excited about the new charts release, as an exclusively VR flyer I am now disappointed.

Yes that’s really annoying. I just looked at the new charts on desktop in anticipation of using them in VR and then find it’s not available in VR. Very disappointing and means that there is still no good solution for proper VFR flying in VR yet. Hopefully this is on a roadmap rather than just being technically not possible.

Well this is a major disappointment for me as I only fly in VR and use the in-game Navigraph app extensively. Hopefully, they will find a solution to this. Not sure if it is Microsoft or Navigraph or both that needs to make adjustment.

Very bitterly disappointed, I only fly in VR and was counting down the days to being able to fly VFR using the in game panel in my headset. I really hope a solution is found soon.

No VR support no buy. If anyone should support VR is should be the flight sim community as it is an incredible experience only recently being fully realized with the advent of proper advances in GPU rendering and headset resolution. No thanks to pancake mode lost a subscriber here.

On one hand, I’m glad I found this thread. I read the Navigraph email today, and noticed way down the email the part about MS Flight Simulator In-Game panel. I wondered, “does this mean what I think it means?”. This thread confirms…ya, not going to work in my main Sim in VR. On the other hand, it is disappointing.

It’s the first I’d heard that Charts 8 was not going to work. While I can appreciate there are technical reasons for this omission, I think it Navigraph could have been more upfront about this matter…managed user’s expectations. Perhaps they were, and I just missed it. (??) But like others, I was really looking forward to these new features. And to find this out on release day?

Perhaps the user base for the In-Game panels is just too small for the effort required to develop a solution. Dunno.

Still, the current In-Game Navigraph panel is quite elegant in its own right. Sad to see what might have been.