Being a new controller on Vatsim now, I see some strange routes regarding our education airport Hannover (EDDV).

The one happening the most:
EDDV → EDDB (Berlin): First suggested routing is via WRB, which makes no sense (see pic). We need to manually change the flightplans to MULDO, which is especially difficult for new pilots. 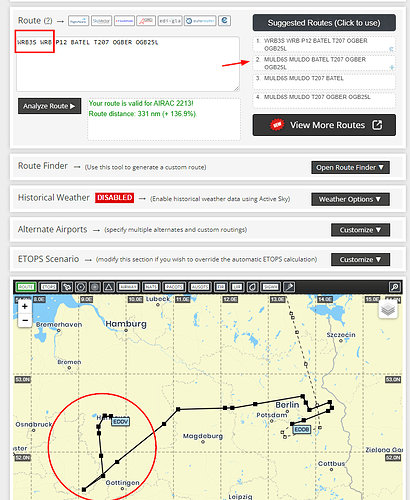 Second, maybe some restrictions regarding destinations from EDDV can be added to the code:

The routing via WRB passes IFPS validation (surprisingly). Eurocontrol’s IFPUV is a much more advanced system, so if it says a route is valid, SimBrief generally doesn’t question it.

For the altitude restrictions, if they are included in RAD Annex 2A, SimBrief should already be aware of them.

Looks good, WRB seems to be gone, thank you