Brief Freeze Every Second with Panel Not Minimized

What I expected to happen.

No or little impact on game performance with beta 8 panel open or closed.
​

Charts 8 In-Game Panel Beta Testing
Stutters when used together with 310R
No compatible with VR
stephen December 31, 2022, 7:13am 2

Could you please compare it with the old, non-beta panel? The one you install from Navdata Center. Is the same freeze every second there (when you have moving maps enabled)?

Will check later during the day and give feedback (in a longer flight now, don’t want to exit).

I didn’t use the panel much previously, cannot remember seeing this the times that I did.

This beta version is such a great improvement, I will be using the panel “all the time”.

With both legacy and beta charts panels installed:

Hope this helps, let me know any other information needed.

Please also verify that Moving Maps is enabled in both the old and new panel (magenta symbol showing your plane) and also follow mode (when the map moves along and keeps the aircraft in the center). Then compare the two. Thanks!

I also have this lag with VR wih the new beta panel, same occurences as OP

Here is a screen video capture, as you can see: 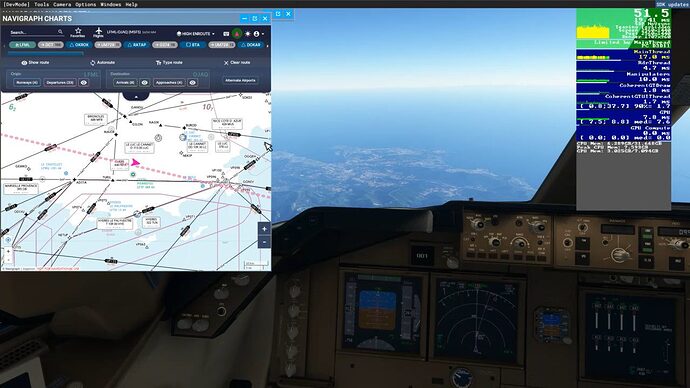 FYI, I tried this with A32NX, same symptoms.

I’ve used the beta in Fenix A320 and Aerosoft CRJ. I fly in VR. The one second micro stutter is very nauseating in VR. Unless there are any requests to test a particular scenario I will refrain from using the beta until I see info to indicate this stuttering is fixed. Shame as the functionallity is a great improvement over the legacy panel.

Hello,
I also fly exclusively in VR, lately with the Aerosoft CRJ. I am also experiencing the same every 3 second intermittent 1 second duration freeze described above. I noticed that the freeze goes away when I deactivate the magenta location tracking arrow on the maps/charts.

In case it’s a CPU limiting issue, I have an intel 6700k for your information.

Thanks a lot for the recording!

I think we can safely say that the moving maps function is causing the stutters. We will investigate the issue and look for any opportunities to optimize the feature!

Thank you for your patience.

Hi there, have you already done anything about the problem.
The reason I am asking is that I have done 2 flights, one yesterday and one today and the stuttering has stopped all of a sudden. I am happy to report that from my situation is that it seems to be stutter free

We have made several optimizations, but they have not been directly related to the moving-maps feature itself yet. That said, they should still have improved performance at least slightly!

Just wanted to throw my experience onto the heap. I’ve been having this issue - 1Hz (microstutters?) due to moving maps.

I think it’s possible that the reason that others have noticed the stuttering stop is that they were likely on different aircraft types - just a hunch. Anyway, for me, this is very much still an issue!

Thank you SO much for facilitating this beta process, so cool to be reporting bugs and helping y’all make this amazing piece of software run as smoothly as possible prior to release.

I am having this issue as well, with the new charts open I get the frame hitching every second, when I close the new charts it runs smoothly. The old charts run fine with no hitching.

An update was released today that should bring a noticeable improvement to this issue. Please try it out and let us know about your results!

Just took off from LICJ and not a single stutter when having the airport diagram open all the time during taxi.

Just took off from LICJ and not a single stutter when having the airport diagram open all the time during taxi.

Happy to hear it! Please try it with the enroute map as well, as I think you only tried it with a chart open?