Will this be a public beta? If not how long do you envision the beta period to last, aka when can your customers actually get their hands on this.

I too am eagerly awaiting the VFR charts in VR.

It will be a closed beta, initially at least, and it will start now during Q2, i.e. very soon. We then expect the public release in Q3.

@stephen For those of us who’d like to sign up to be a part of the closed beta, what would be the way to do this?

i will be really pleasure, if i can be a part of the beta tester team.
my background is PPL-A (i am waiting for the practical exam) / BZF1

That’s too bad, was really hoping for it this quarter.

But since others have asked, I’d also like to volunteer, I fly almost exclusively VR (G2), so maybe I could help test that (the current panel has numerous problems but I don’t bother report them as new version coming).

Please report them separately anyways! As mentioned here, there are several issues related to the G2 headset that we have no control over. But with MSFS being a moving target when it comes to the technology that the panel builds on, we need the reports in order to know when stuff breaks due to changes in the simulator, so the feedback is always greatly appreciated.

I just purchased Navigraph and im tossing my vote in for VFR… as a former software developer, I applaud Stephen’s team for this huge undertaking! Especially since they are doing a total rewrite! If you folks need beta testers I would be happy to.

Sidenote, I too am hoping Xbox opens up somehow to add support for this in MSFS2020. Glad to be a new member here and to Navigraph!

VFR charts is something I’m really looking forward to as well. Navigraph is an awesome tool, but not very helpful if you want to fly VFR on Vatsim and you’re trying to figure out where the reporting points are or where the proper VFR tracks in and out of controlled airports are…

Just saw a post on the MSFS forum that the beta for VFR charts will be out in a week.

If so who can sign up for th Beta?

Thank you for your interest. I didn’t say ”in a week” but ”in a couple of weeks”, but nevertheless it is soon

We’ll get back to you on this.

Very much looking forward to the VFR charts.

Hi there! We’re soon starting the beta testing of our eight version of Navigraph Charts. All users with an active Ultimate subscription are now welcome to apply to our Navigraph Charts Beta Tester Program. Follow the link to the registration form below and we will contact you when it is your turn to try out the new product. Apply now The application window will close on Thursday May 26.

Together with charts, will be also navdata for VFR, such as Visual Reporting Points?

VFR waypoints / Visual Reporting Points are already coded by Jeppesen in the navdata. Their ident normally start with “VP”, and they are also visible in the current Charts app. They will be more clearly shown as VFR waypoints together with their full descriptive name on the chart in the new app.

On that topic with VRPs will it be possible to then see them on the ingame Garmin, as currently with GPS fixes?

Hi,
we still provide such waypoints in all addons, which we support.

Here an example from the Rotterdam area:

… or here from our current charts, when you look for VP: 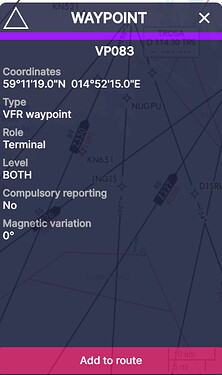 … or from the MSFS (the same VFR waypoint from our chart screenshot above):

Again, such VFR waypoints are still included - in the charts and also in the navdata
Cheers,
Richard

I’ve read through the topic, and received your invitation. Thank you for your offfer to join this test and with all respect intending niether to waste your time or mine, can you state clearly if all or any of the NOAA WORLD, SECTIONAL, TAC’S, TERMINAL, SFRA’s are included this beta.

I guess you mean FAA, not NOAA?

No we don’t plan to include any government raster charts at this time, so if FAA charts is a requirement then this product is not for you.

We render dynamic vector charts based on Jeppesen VFR data and other sources to present the required information for VFR flight, in a style similar to sectionals but with our own touch.

I suggest you give it a try, but it is of course up to you.