in X-plane11 with the latest 2212ref1 and in Navigraph Charts as well
TRENT TRT VOR 108.45 missing
But it should still exist according to German official AIP here : AIP IFR Germany

Hi,
according the notam C3822/22, this VOR is decommissioned:

Well, this Notam just says that the S ID has changed, and that the VOR will be decommissioned in the future, but is not yet decommissioned.
At least that’s how I read it.
Kind regards.
Bodo.

The NOTAM is created on Nov 29th 2022 and valid from Dec 20th 2022 11:00 on … permanent. So that´s not the future, this notam is still active. I can´t verify if this navaid is still active or not … but for me it makes no sense to create a notam, which inform about a change of a procedure with the announcement that a navaid will be decommissioned sometimes in the future. Why should I do this now and not on the date, when the navaid will be really decommissioned? The reason of this change is the decommissioning of the navaid …

yes , sure the Notam is still active, but it’s only valid for the SID itself , but not for the VOR, which is still in operation. The VOR is only mentioned to understand why the SID is no longer valid.
It might be a hint that the VOR will be decommissioned in the future. But it is’nt yet. 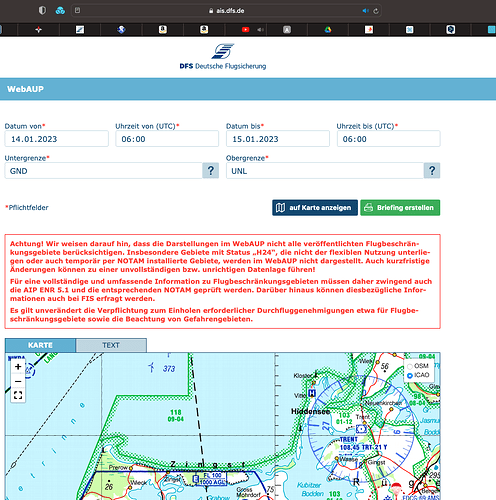 AND: just talked to the German NOTAM Office Telefon: +49 6103 707-5555:
They confirmed that the VOR is still operative and NOT yet decommissioned, but only the SID is !
If you don’t believe me, call them for yourself.

The reference from Jeppesen is exactly this NOTAM, sorry … We have no influence how the countries report such notams and when the decommissioning of this navaid is wrong, it will be fixed in one of the next cycles.

Here the latest notams directly from Jeppesen, where you also can see, that (at least Jeppesen due a report of the country) this navaid is decommissioned (you see the black bar on the left side, which indicates that this is a new information/change): 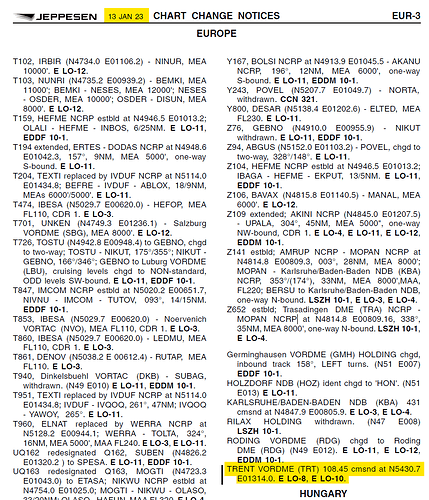 Seems everyone may be right here. As Richard pinpointed TRT VOR was decommissioned for some time (may be for maintenance) as reflected by the quoted NOTAM regarding the affected SID. Now, it seems it is commissioned again (Jepp Chart Change Notice indicates cmsnd). At least, it is my interpretation. Whatever the case may be, it will appear in the next AIRAC (2301) release

Hi Bodo,
I can confirm now, TRT Trent is back in the upcoming AIRAC 2301 … so it seems really, as Hervé mentioned, possible that the TRT navaid was under maintenance or similar else. The strange thing here is only, that i have nothing found about this possible service-outage.

Anyway, it´s back with the next cycle …
Thanks
Richard

This topic was automatically closed after 2 days. New replies are no longer allowed.